New Year, time to do a bit of tidying up.  I did a little in the garden this morning, clearing away some more dead vegetation and putting nets across the raised beds to keep the cat off.  But then it got dark and I moved inside and tried to clear up my desk a bit.  It was hidden under a pile of books and papers so I’ve had a satisfying clear out.  Actually, it’s still pretty hidden but at least I now have a rough idea of what’s there and why. This also involved putting at least some of the books back on their correct shelves. Which is when I realised that my garden books had overflowed their allocated bookshelf space – time to pass some on to a charity shop? I don’t really need any of them but I like them all for different reasons.  I’ve written about some of my favourites before: indoor gardening, containers, cookery books, children’s books but here are my absolute top gardening books. Number one, my all time favourite gardening book is The Reluctant Gardener, by Ethelind Fearon, published 1952. 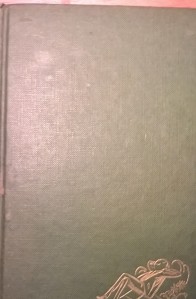 You can still get copies of this through second hand booksellers – whenever I see one I snap it up and distribute to gardening friends as it’s so good. This copy belonged to my grandmother which makes it all the more precious. It has her scribblings in the margin and underlinings of important points:

The book pretends to be a lazy person’s guide to gardening but it uses this excuse to show that ‘doing nothing’ can often be the best way. ‘What we want is a garden which will do its own work, feed itself, clothe itself, sow itself, grow itself, tie itself up, cut itself down and in all respects be as relaxed and happy as its owner’. She continues her advice on pruning shrubs to say that the best way to do it is to ‘cut off the bit which has bloomed’ ‘while it is blooming’ and to prune the blackcurrants by cutting off whole branches of fruit and bringing them indoors where it is easier to detach the currants. She also has useful advice on pest control and compost making. Of course a book published in 1952 is rather old-fashioned and has its dodgy moments but it has been an old friend to me.

Moving slightly further through the twentieth century, my next favourite is by Geoff Hamilton, much missed presenter of BBC’s Gardener’s World. I’ve got several of his books but Paradise Gardens (BBC, 1997) is well-thumbed, particularly for the chapters on scented gardens and encouraging wildlife. The book was based on his last TV series and so is quite special for that reason. And of course it fits well with my blog:

These books are mainly not about vegetables and I do need a vegetable bible from time to time. That’s when I turn to The Complete Manual of Organic Gardening (Basil Caplan, Headline, 1992):

This tells me everything I need to know about sowing, pruning, harvesting, soil, compost and dealing with pests (except that it doesn’t tell me everything about pests, as I’ve yet to find a solution to either slugs or vine weevil that actually works). It has the added bonus for me that I bought it with a book token that I received for a piece of illustration work so in a sense I earned it.

My bookshelf contains other gardening gems that I turn to from time to time. I don’t think I can spare any just now so it will just have to overflow. 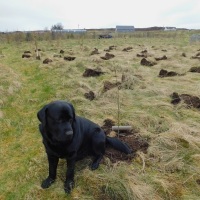 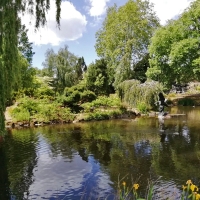