Last summer I planted phacelia in one of my raised beds as a ‘green manure’. It has been growing slowly over the winter, providing a shady place for cats in this strange sunny spring :

.. and just about to burst in flower. The problem is that I need that bed to grow runner beans which I sowed in paper tubes last week

so the cats and flowers may just have to move somewhere else. The phacelia flowers are lovely though and the bees like them so I made a start on digging the trench for the runner beans, leaving an island of phacelia in the middle. I’ve described my tried and tested method for trench digging here. This year I followed much the same method. Here’s a ‘before’ picture, minus cat, with the flowers just about to come out:

First collect together some essential materials: a bucket full of cardboard or paper, soaked in water; four buckets of home made compost; several watering cans of water; some dried seaweed meal. First of all dig a trench about a spade wide and deep along one edge, keeping the soil that you dig out in a bucket. These raised beds are square so are easy to just dig trenches along the four edges of the bed. Then line the trench with with wet cardboard:

This year, I then added a layer of cut phacelia

Empty a watering can full of water onto all of this

Then cover up with the topsoil. Repeat, working round each side of the square, then leave to settle for a few weeks, by which time, hopefully, the runner beans will have germinated and grown into sturdy little plants, ready to plant up around a wigwam of garden canes.

And a nice little island of phacelia in the middle, for the bees and the cats to enjoy for another few weeks. 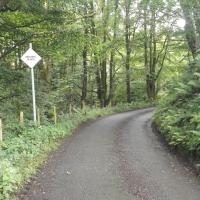 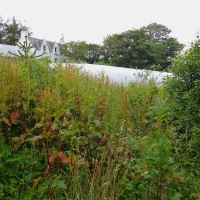 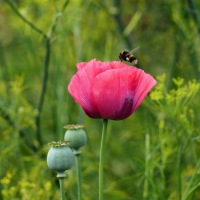 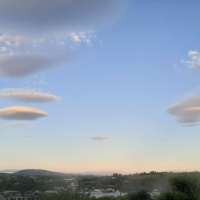