It’s dreich, a word chosen as the most popular Scottish word in a poll a few years ago – link here. Anyway, it’s usually reserved by me for November which is month which is nearly always dreich. Not May. But here we are, experiencing a dreich May and trying to make the most of it. Despite the incessant rain, there have been some moments of sunshine and I did manage to get into the garden to look for ‘wildflowers’ for ‘International Biodiversity Day‘ on Saturday. I found this little collection, all growing in the lawn and tweeted it for #SixonSaturday (sorry no time to do a blog post on Saturday). Here we have a sturdy little cuckoo flower, growing in the side of a fairy mound, a rather nice collection of daisies in the lawn, a yellow poppy also in a fairy mound, lots of clover, not yet flowering, in the middle of the lawn, a tiny violet, self-seeded on in a grassy edge, and a rather splendiferous dandelion clock. When I took these photos there were no dandelions flowering but lots of seed heads. An hour or two later a clutch of yellow flowers had opened.

I also decided, probably against my better judgement, to plant out some of the tomatoes in a raised bed. The weather forecast was for slightly warmer weather (ha ha) but that meant warmer than the 3 degrees on Thursday night. I chose the toughest looking plants and planted them out, keeping the rest in the seed palace and some of the baby giant tomatoes still in the house. Then I worried that they would really not be happy so improvised a new cloche to cover them up. This made from bits of my old broken seed house, a big sheet of plastic retained from some long forgotten delivery and some clothes pegs.

You can see in this picture a couple of other innovations: the falling apart wooden raised bed has been partially replaced by bricks and I’ve solved the problem of never remembering which tomato variety is which, by writing their names on the bricks. We’ll see if that works!

It probably won’t last very long but it should protect these tomato babies from the dreich weather for a few days until May properly starts. 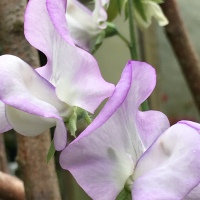 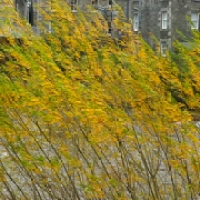